Skip to Content
Home / Nutrigenomics of Vitamin B12 and Invasive Cancer

As a society we are becoming more aware of how daily life patterns directly affect our health and wellness. Exercise, food, and sleep not only influence our short term mental and physical states, but there is increasing evidence that there are lasting effects on our DNA and potentially our offspring’s DNA. Our DNA, or genome, is composed of a specific sequence of nucleotides that control our growth, development, and the ability to carry out biological functions needed for survival. How the DNA is packaged and changes to this packaging is referred to as the epigenome. This can be thought of as a recipe, where the genome is a set of particular directions to make a dish. However, a cook can make a recipe their own and change up the steps to better fit a desired outcome, which is like the epigenome. If more steps are added to a recipe, it becomes more difficult to use, and less people will make the dish, and it can also be simplified by taking out more in depth steps. In the epigenome, changes are made to proteins, making them more or less easily accessible to make genes that our bodies need to function.

Nutrigenomics is the sweet spot where the study of the epigenome and nutrition meet. One nutrient that has the ability to have a long lasting impact through DNA changes is vitamin B12. Vitamin B12 is an important molecule that plays a large role in the proper functioning of the body. Despite the importance of consuming enough vitamin B12, a significant portion of the population do not acquire the recommended amounts in their diet. This can have detrimental and even deadly health outcomes, one of these being cervical cancer. Cervical cancer is the second most prevalent lethal form of cancer to females around the world, and 80% of incidences of cervical cancer occur in developing countries9. How does a combination of our diet and where we live produce these undesirable health outcomes from a deficiency in vitamin B12, and are there solutions to these challenges?

Vitamin B12 Deficiency and Diet

Vitamin B12 is one of the many forms of Vitamin B, all of which are essential nutrients in our diet for the proper functioning of our bodies such as helping to create new blood cells, convert food into energy, and maintain healthy tissues4.

There are eight B vitamins, all of which are water-soluble, that hold important roles in biological functions as cofactors and precursors5. Vitamin B12 is produced by microscopic organisms called bacteria and archaea5. These tiny creatures can be found within the bodies of animals like cows, chickens, and fish, and there are no plant or fungi-based sources of this important vitamin5. Those who consume animal products like meat and dairy can obtain the proper amount of B12 through their diets. However, the sources of food in vegan and vegetarian diets make it hard to obtain the necessary amount of vitamin B1210. Wheat germ provides a possible innovation to fortify foods like flour with vitamin B12 to help vegetarians and vegans obtain the vital nutrient (Snow, 1999). 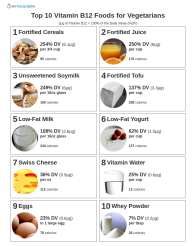 As there is an increasing number of vegetarians and vegans in the world, the chart above shows a list of non-meat foods that contain vitamin B12. After vitamin B12 is ingested, it is separated from food sources in the stomach by stomach acid, and after multiple digestion steps, it enters the bloodstream where it becomes available for uptake by cells5.

The recommended daily amount of vitamin B12 varies across ages. As we grow older, it becomes harder to break down vitamin B12 and absorb it10. While up to 15% of the world’s population may be deficient in vitamin B12, there are a multitude of symptoms and they can come on slowly, making it difficult to detect or pinpoint among other possible diagnoses10. The majority of proximal symptoms resulting from vitamin B12 deficiency are due to resulting anemia, including fatigue, vision loss, and neurological problems8.

Vitamin B12 as a Worldwide Issue

Vitamin B12 deficiency is a worldwide issue, most severely affecting areas that include India, Mexico, and Central and South America. Although it is not extremely prevalent in Asia,

There is evidence that nutrigenomics plays a role in the mechanism for this because of vitamin B12’s role in DNA methylation as a coenzyme. One carbon metabolism as previously mentioned refers to two biological cycles in which methyl groups containing one carbon are transferred between molecules to drive reactions5. Vitamin B12 is essential for these processes to continue, as seen by the simplified diagram shown in Figure 2.

This diagram places vitamin B12 at the center of the two different reactions and is a necessary component to drive it forward and produce the necessary biological molecules. Think of the many reactions in your body like a river, and if all is well, the river keeps flowing, and the body functions normally. If a big tree fell into that river, causing a big blockade, the river wouldn’t be able to keep flowing like normal, and on one side of it, water would start to build up, whereas on the other side it would dry out. Vitamin B12 deficiency plays a similar role as the tree. When not enough B12 is consumed, chemical reactions that normally occur can no longer function properly causing the starting molecules to build up and the product molecules to become depleted. The starting molecule in the reaction is homocysteine which builds up and changes the histones, and the product molecule, methionine, is depleted and decreases histone methylation as well5. 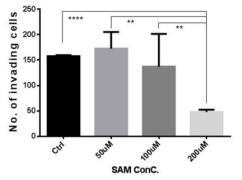 Further along in the cycle, the levels of S-adenosyl methionine (SAM) will also decrease as a result of vitamin B12 deficiency6. SAM is a methyl donor for gene methylation, and when absent, the decrease in methylation enables tumor formation13. In a study done on SAM and liver cancer cell growth, Figure 3 shows that increasing SAM concentration significantly decreases invading cells, indicating that SAM can decrease liver cell formation13. SAM’s normal methylation action implicates SAM as a way to prevent cancer formation by preventing a decrease in methylation from a decrease in vitamin B1213. These described mechanistic consequences of vitamin B12 deficiency leads to malfunction in DNA synthesis, epigenetic regulation, and DNA repair.

Link of Vitamin B12 Deficiency to Cervical Cancers

Previous research has identified folate deficiency as an indicator of cervical cancer; since vitamin B12 shares the same pathway as folate, it may be implicated as a cause of cervical cancer1. Mechanistically, a deficit of vitamin B12 hinders DNA synthesis, repair, and epigenetic regulation through methylation state changes. Alberg et al. sought to evaluate this possible relationship by collecting serum donations from women in Washington County, Maryland by measuring folate, and vitamin B12 levels1. Thirty-nine women with cervical cancer were used as well as two other control groups for matched analysis based on age and race1. While vitamin B12 did not have a statistically significant positive correlation with cervical cancer protection, it did mirror the positive trend as seen with folate1. Hyperhomocysteinemia is a risk factor for degenerative diseases, specifically cervical cancer because it is a molecule that builds up with a vitamin B12 blockage9. Among 322 women in South India, Ragasudha et al. researched these connections with cervical cancer risk factors due to the adherence to vegetarian diets in the region9. Approximately 84% of the studied population had hyperhomocysteinemia, and 60% of the population had vitamin B12 deficits which led to a 10.4 fold increase in risk of invasive cancer9. These drastic findings call for immediate attention and increased prevention for cervical cancer of which will be discussed further.

Link of Vitamin B12 Deficiency to Other Cancers and Diseases

Vitamin B12 deficiency impacts people globally through a combination of not consuming enough vitamin B12 through the diet, not being able to efficiently break down vitamin B12 with age, and changes in the physical environment can alter the epigenetic marks on the genome. If left untreated, a vitamin B12 deficiency can result in serious diseases, including cervical cancer, pancreatic cancer, and nasopharyngeal cancer. This deficiency is also able to persist through generations if the expecting mother is vitamin B12 deficient. However, there are solutions to treat and prevent these undesirable health outcomes. As vitamin B12 deficiencies are a global issue, often affecting those already in a resource-deprived area, combined with the severity of the health outcomes that can result from inadequate vitamin B12 intake, it is therefore essential that the necessary steps are taken to mitigate these outcomes. By increasing the awareness of the deficiency, and educating those, especially in areas with a high prevalence, of what causes the deficiency and how to prevent it is crucial. It is also imperative to ensure that those impacted are also able to learn of the treatment options available, as well as to increase the accessibility of these options.