Many people understand that a healthy diet can contribute to good health, but people might be less aware of how their diet can impact their future child’s health. Pregnancy is a very sensitive period in which the behavior and diet of a mother can leave a lasting impact on her child. For example, studies show that Israeli children have an 81% lower rate of peanut allergies than their Western counterparts. This trend might be due to the widespread consumption of a popular peanut-flavored snack called Bamba during pregnancy and early childhood3. Studies also demonstrate that consumption of folate, also known as vitamin B9, is associated with positive birth outcomes. Dark leafy vegetables, whole grains, peanuts, sunflower seeds, fresh fruits, liver, and seafood naturally contain folates. Mothers with a folate-poor diet during pregnancy have an increased risk of having a child with neural tube defects (NTDs) and other cognitive impairments. NTDs are severe birth defects that can cause serious health issues. On average, about 1-2 in every 1000 pregnancies are affected by NTDs6. Therefore, many pregnant women take folate supplements throughout their pregnancy.

The first evidence of the impact of folic acid consumption during pregnancy is shown below. When women take folic acid-containing pills, they have a significantly lower chance of having a child with a neural tube defect. Compared to a group of pregnancies in which the mother took a placebo (like a sugar pill), the folic acid group had six times fewer cases of neural tube defects6. The left “Intention to treat” columns in the figure below represent data collected from previous studies separated in which study administrators instructed participants to take these pills daily. The right columns labeled “On-treatment analysis” used data from studies in which study administrators supervised and provided these supplements, which is more reliable. Both sections of the figure demonstrate that taking folic acid causes a significant decrease in the frequency of Neural Tube Defects, even greater than 80% in the On-treatment studies. 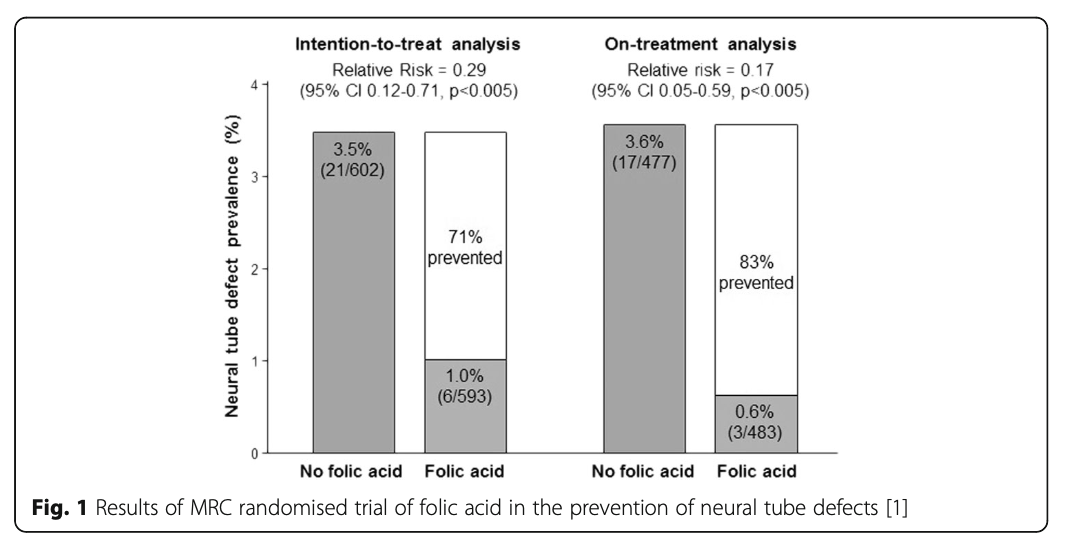 Folate acts through an epigenetic mechanism that alters gene expression. Epigenetics is a relatively new and rapidly developing field of research that investigates the mechanisms by which genetic material (DNA) can interact with specific chemicals or molecules in the body, which changes how it is expressed. Folate serves as a methyl donor that can add groups of carbon attached to 3 hydrogens to the genetic material. These methyl groups can be thought of like a paper clip: if you are reading a manual and some pages are clipped together, you won’t be able to see those pages. The pages in the manual are still there, of course, and can be accessed by removing the paperclip. Similarly, methylation is reversible, but makes some sections of the DNA unread.

When this methyl group (shown below) interacts with genetic material, it silences that section. This means that readers cannot view this section, so a “product” whose instructions are in that section is not made. When people consume more folate from food or supplements, they tend to have more methyl groups attached to their DNA, so more sections are “paperclipped” and not able to be read. Sometimes, the unreadable DNA is important for a certain process, and so it can be harmful if the products written in the silenced DNA are not made. On the other hand, sometimes, the silencing of DNA is needed so that each type of cell can develop without making products, which are proteins, that belong in other cell types. For example, even though a stove is extremely helpful in a kitchen, a stove is not needed and could potentially be dangerous in a child’s bedroom, so you would likely want to have the instructions for making a stove open and readable in the kitchen, but not in a bedroom. The same idea is important in different kinds of cells: there are certain sections of DNA that need to be expressed in bone cells that should not be expressed in skin cells, where a protein that usually belongs in bones could potentially be harmful. Because of this, DNA methylation is required to silence unneeded sections of DNA in each cell, so it is necessary to have a sufficient amount of methyl group donors, like those that come from folate. A delicate balance must be achieved to express the right parts of the DNA in the right places in the body. Methyl group donors are critical during prenatal development because this is the period in which some cells turn into bone cells, and some cells turn into skin cells, so it is imperative that right sections of DNA can be “read” (unmethylated), and others are “paperclipped” together (methylated). This is why folate intake is vital during pregnancy. 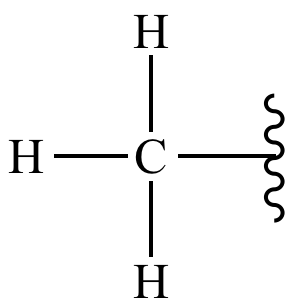 There is a well-established connection between folate intake and neural tube defects (NTD), specifically. Mothers of fetuses with neural tube defects have, on average, significantly lower levels of folate in their blood1. In 1991, before there was a strongly established link between folate and NTDs, a trial was completed with about 1,200 women from Europe, Asia, and Australia countries. All of the women had previously carried at least one child with an NTD, and they also became pregnant again at a point during the trial. The participants were split into two groups, one of which had to take a folate supplement throughout the pregnancy, and one which did not take a folate supplement. The trial demonstrated that 1% of the mothers who were assigned to take folate had a pregnancy affected by an NTD, while 3.5% of the mothers who did not take folate had a pregnancy affected by an NTD (Medical Research Council Vitamin Study Research Group, 1991). Although they could not control for all potential variables, since this study was done in humans, this trial still was one of the first to demonstrate that folate likely has some protective effects against the development of neural tube defects. This evidence was so strong that the trial actually ended early, before reaching its desired goal of obtaining data from 2000 participants5.

Because of trials like these, it became essential to research how exactly folate affects neural tube development. Based on the current research, it seems that folate may not target specific genes, and is required for DNA methylation in general. In the same study that found a correlation between blood levels of folate and rates of neural tube defects, the authors also found that the tissue within the brains of fetuses affected by NTDs had significantly lower levels of DNA methylation than fetuses that were unaffected1. Because lower levels of methylation are associated with decreased silencing of DNA, these fetuses would likely have an increase in expression of the affected areas of DNA. In other words, because there are fewer paper clips available, many sections of instructions may be readable, potentially resulting in the building of stoves, bathtubs, or beds in either too high of a quantity or in rooms, or cells, where they do not belong. Although these findings cannot prove a causal link between folate and brain tissue methylation, the correlations between low levels of folate and NTDs, and between NTDs and low levels of methylation in the brain, suggest that folate levels likely affect levels of methylation in the brain during prenatal development.

Because folate is important for methylation in general, the role of folate does not seem to be limited to one or two specific genes. One study compared the methylation status of genes between the offspring of two different groups of rats, one which was given a normal diet and the other which was given a folate-deficient diet. They found 1939 genes whose methylation status was affected by diet, and that many of these genes were in some way related to neural development or cognitive function7. These findings show that folate has a role in determining the methylation status of many different genes related to neurodevelopment, and because methylation affects the silencing of genes, maintaining a sufficient level of folate in the diet throughout pregnancy may be necessary to avoid unwanted outcomes in neural development.

Despite this seemingly strong support suggesting folate’s function in determining the methylation of genes related to neural development, more research is still needed. Many studies in humans are, by nature, correlational studies, as the link between folate and neural development is now sufficiently strong so that any manipulation of folate within a pregnant mother’s diet would be unethical. Despite these limitations, research on this topic is still promising and exciting, and experiments in animals are likely to prove very beneficial, as they allow us to make these manipulations that are necessary to show causational relationships.

Folate is disproportionally accessible to different groups. Since folate is naturally found in some fresher foods that are more expensive, women with more economic resources who live in areas where these healthy foods are readily available likely already have higher levels of folate even without supplements. Studies have reported that fewer than 5% of low-income women take folate supplements during pregnancy2. Since insufficient folate during pregnancy is strongly related to severe and chronic conditions, it can be even more expensive to care for a child who suffers from these illnesses. Therefore, this phenomenon is cyclical and further disenfranchises certain members of our society. Folate supplements cost only 30 cents/day on average, so many people can afford them. It is possible that pregnant women who do not take folate supplements just do not know how important they are in the first place. The disparity in folate consumption affects not only financially disadvantaged people, but also targets certain racial groups. It has been reported that 13% of black and Hispanic mothers have folic acid insufficiency, whereas only 5.1% of white mothers have folic acid insufficiency2.

Folate intake is particularly crucial for the neural tube development that occurs within the first 28 days after conception. Greater than 50% of pregnancies are unplanned, however, and most women do not know if they are pregnant within this first month. A study in England demonstrated that 62% of women started taking folic acid after a confirmed pregnancy, but this was too late to prevent neural tube defects6. The women who do take folic acid before pregnancy are more frequently older, white women (Figs. 2, 3). Therefore, it is also important that all women of childbearing age who are open to carrying a child have sufficiently high levels of folate either through natural sources like diet or supplementation. For this reason, eighty-one countries, including the US, have passed laws that mandate folic acid fortification of flour. This measure has led to a reduction in neural tube defects.

Clearly, sufficiently high folate intake is very important for women of childbearing age. Folate acts as a methyl donor, which leads to more available “paperclips.” Without methylation, the genetic material, similar to a builder’s manual, can suggest that products should be expressed in the wrong places, similar to stovetops being built in children’s bedrooms instead of the kitchen. Despite a large body of evidence suggesting the importance of folate in positive birth outcomes, many women still do not take folate supplements for a host of reasons. Disparities in access and knowledge disproportionately affect certain already disadvantaged groups. This issue can further facilitate cycles of poverty. Therefore, it is important that scientists clearly communicate to lawmakers the importance of implementing ways to increase folate accessibility, for example, by providing folate supplementation for women of childbearing age (which is relatively inexpensive already) or by continuing to fortify grains with folate.